Last week's Economist magazine "Tech View" column had a very negative item about the XO laptop, calling it "clunky," dismissing its developers as "Pollyannaish," and saying the "Give One Get One" program under which I bought mine "fizzled."

Note: After I wrote this page and mentioned the issue on an OLPC wiki, this official reply to the Economist from Walter Bender appeared... or I had simply missed it in my earlier search.

No sources were given for the Economist's "fizzled" comment -- I haven't seen anything elsewhere about the G1G1 program not meeting its goals. As a combination post-beta, charitable contribution and public-relations program, I'd call G1G1 a success -- it got the rumored "One Laptop Per Child" out into adult hands and onto network television screens throughout the U.S. and presumably is financing delivery of thousands of computers to kids...

My XO hasn't failed to attract questions and positive comments at coffee shops in three states -- thanks to G1G1 "bundling" a year's subscription to T-Mobile wifi service. (Most common comment: "How can I get these for my kid's school?") Online, I see more "let's figure it out" and "let's see what we can do" discussions than whining about this all-new device's bugs.

The Economist's reviewer apparently couldn't figure out how to move material between the system's text editor and a Web mail application... I've known a few Windows users who couldn't figure out e-mail attachments with their machines, either. I've been testing the machine with online forums, blog-editing software and Web-based e-mail with reasonable success -- for a machine that really was designed with other things in mind.

I'm not familiar with the other computers the article mentions -- from Intel and other commercial manufacturers, but I suspect that they lack major innovations of the XO, such as its readable-in-daylight reflective screen, its instant "mesh" networking with other XO laptops, its commitment to open-source software, its weatherproof, scratchproof case, and the community of volunteer developers, documenters and testers I've been exploring for the past couple of weeks.

Yes, I had to use the "clunky" Linux underpinnings of the computer to install additional software that American or European adults might want (a more sophisticated Web browser or the ability to play Web videos), but I wasn't expecting a consumer product.

The Economist had no discussion of the music, writing and HyperCard-like EToys programming language software -- or the instant "mesh" networking intended to make it a collaborative classroom workspace for children... without sending participating school systems an annual bill for "software upgrades." That all may be Pollyannish, but I'm waiting to hear how the first year of actual classroom use of the computers works out.

The Economist also moans about "the hubris, arrogance and occasional self-righteousness of OLPC workers." I'm not surprised to find missionaries acting like missionaries, whether they're selling religion, technology or capitalism. I can't imagine anyone using similar terms to describe a crew of Intel and Microsoft salespeople. Heh.

The Economist's Tech View column was accompanied by a Business View piece, The Laptop Wars: Will charity or profit end the digital divide?, about Intel's attempt to sell its small commercial laptop, the ClassMate, in the markets targetted by the not-for-profit XO. The Economist questioned the need for OLPC's idea of "making laptops available cheaply to children in the developing world... as an act of charity," when others believe "there are fortunes to be made designing products for the world’s poorer consumers."

A brief blog item in the Guardian echoes the Economist, but also invites comments. Here's one that caught my eye:

Hate to point out the obvious, but the Economist is not exactly an unbiased referee between the competing philosophies of altruism vs the profit motive, and their realisation in political and economic systems! The Economist is a right-wing publication dedicated to the triumph of corporatism and corporate greed, and the destruction of anything that whiffs vaguely of socialism or doing things for people on a selfless or non-profit-motive basis.

Alas, with my own new semester starting on Monday, I don't have much time to look for responses or discussion... and I will be setting aside my XO for the weekend...

But here are some bookmarks a quick search found; I'll start with them when I get back to the topic: 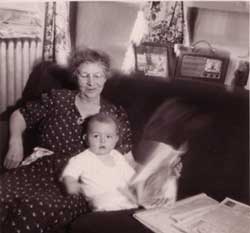 I've decided to be "Robby" throughout the one laptop per child (olpc) online community -- using the nickname that served me well when my hands were as small as those the little green xo computer is intended for.

Here's Robby's olpc bio page, with links to olpc forums, wiki pages and interesting projects -- including the idea of adapting a journalism tutorial originally written for senior citizens with pens and 1990s' computers to one for children with little green 21st Century laptops.
Posted by Bob at 4:48 PM No comments: