Drive-by shooting at edge of campus 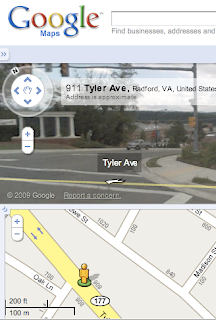 Radford University has been the victim of a drive-by -- of a non-violent kind -- by whoever shoots street-level photos for Google Maps.

The pictures are a shot of reality when compared with Google's local map, which leads visitors into a couple of dead-ends. If you browse around the university with maps.google.com, you get a map that ignores several years of campus construction and omits the campus entrance at Jefferson and Fairfax streets.

Ask for the School of Communication offices at 702-704 Fairfax St., and instead of a straight route down Jefferson, you get wild goose chase directions down the wrong ends of former cross-streets Adams or Fairfax, which have been campus cul de sacs since before I got here.

With the addition of street-level photos, Google's Rt. 177 (Tyler Avenue) map shows an Oscar-like golden figure you drag to the roadway for a street-view color photo. The photo above clearly shows the campus gates where Tyler meets Jefferson -- an intersection the map version underneath insists does not exist, the gray swath in front of the forlorn golden guy.

In another Radford reality check, at the foot of Tyler Avenue you can enlarge the T-intersection's photo just enough to see a street sign saying "East Main" while the map insists you are turning onto "Norwood Street." (Maybe that was its name once?)

I hadn't noticed the local street-level pictures until a student pointed them out in class last week. I'm not sure how long they have been online, but I estimate they were taken last summer, since they still show the much-missed Joe's Diner, whose site has been a vacant lot for six months.

Google's photos show only Tyler and part of East Main; the drive-by shooters apparently crossed the New River and never came back, but you can trail them into Pulaski. The City of Radford, meanwhile, has an online Geographic Information System that provides up-to-date maps. No street-level pictures, but it has more detailed aerial photos than Google. See City of Radford GIS or www.radford.va.us/BasicGIS/

Footnote: Yes, I'll mention my headline when we have class discussions of yellow journalism.

Posted by Bob at 2:48 PM No comments: Links to this post

New Ways to Read the Times

"Here at The Times, we often hear a common story of usage from our customers: Reading the Sunday Times, spreading out the paper on a table while eating brunch. For many of our customers, this ritual is fundamental to their enjoyment of the weekend, and its absence would be jolting.

"With this in mind, we present an as-yet-unnamed article skimmer. Think of it as an attempt to provide the Sunday Times experience anytime. Of course, there are parts we can’t replicate: the satisfying crinkle of the paper; the circular stain of your coffee; the smell of newsprint."

The prototype ArticleSkimmer gives you 17 "section" pages, each a 5x4 display of story summaries in 19 boxes -- one double-size at the top. You browse from section to section with the space bar and can choose stories with the mouse or a keyboard shortcut.

Hold down the letter "a" for "article," and numbers appear in all the story boxes. Type the number to load a story. (I learned about the shortcuts by clicking a question mark at the top of the page.)

It's fast. It's easy. It's free, and no ads jump out at you until you go to a story page. Presumably "monetizing" this interface somehow will come along if the word "prototype" drops out of the address.

(Dave's blog, Scripting News, is where I heard about the Times article skimmer item.)

Related -- the Times also has expanded the ways that Web developers can make use of Times material. For an only slightly technical discussion, see this Poynter.com column on what the developers call the Times Article Search API.
Posted by Bob at 7:39 PM No comments: Links to this post

Paul pointed to some Sprouts by Howard Rheingold, whom I expect to be ahead of the curve and teaching about it. I also see that Sproutbuilder is already in use by Gannett newspapers, so here's my first attempt at embedding a Sprout in Blogger: