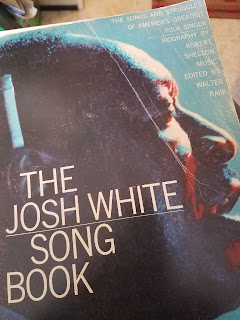 Happy birthday to Josh White!
(February 11, 1914 – September 5, 1969)
I saw him on the old ABC Hootenanny TV show, and soon scraped together the price of a couple of his LPs. (Ones whose album covers weren't too risque to bring into the house; it was years before I got "Empty bed blues," and I don't think I ever let my mother see it.)
I also bought a 191-page Josh White Song Book to show my guitar teacher, who had started me on classical lessons because my first guitar had nylon strings. (Nylon was recommended by the Oscar Brand book I had started teaching myself out of a year earlier. I got a new guitar, with steel strings that Christmas after convincing my parents I was going to stick with it more than I had with the accordion a few years earlier. It was a long time before I could afford a Martin OO 21 like the one Josh played on his albums, but I got it eventually.)
Unfortunately, Josh's book wasn't a guitar instruction book. The $2.95 volume (pricey in 1963; my first Dylan songbook was $1.95) featured piano transcriptions of the songs, not his original guitar arrangements.
I did learn something about music watching my teacher try to work things back to the guitar at my novice level. And I learned other things from the text by Robert Shelton, folk music critic at the New York Times (yes, that was a job then!), who provided song commentaries and a biography of Josh.
It wasn't as thorough as Elijah Wald's "Josh White, Society Blues" several decades later, but it made me feel like a folk blues insider... and, come to think of it, those song book introductory chapters were probably the only biography of a black person that I read in high school, two years before Alex Haley published "The Autobiography of Malcolm X."

Smithsonian Folkways Recordings shared a link to a Spotify playlist with a birthday post today, inspiring my reminiscence..
https://m.facebook.com/story.php?story_fbid=10157545963179815&id=10367554814
Rather than using Facebook to share a Spotify playlist, why doesn't Smithsonian Folkways just share a link to its own web page that sells a classic Josh White album, and lets you download its 14-page LP size booklet as a free PDF? I hope it's because Folkways makes some money from Spotify. Curiously, when I tried to post that question to the Smithsonian account on Facebook, Facebook marked my comment as spam! That reminded me to put my thoughts out here on the more open web, not just in Facebook's controlled space.


https://folkways.si.edu/josh-white/free-and-equal-blues/american-folk/music/album/smithsonian
Posted by Bob at 12:04 PM No comments: Links to this post