The State of the News Media 2009:
"Online Journalists Optimistic About Revenue and Technology, Concerned About Changing Values"

"Journalists who work online are more optimistic about the future of their profession than are news people tied to more traditional media platforms, but at best their optimism is an uneasy one, according a new survey of members of the Online News Association produced by the Association and the Pew Research Center’s Project for Excellence in Journalism."

Convergence News from My Old Hometown

"The nation's oldest continuously published newspaper" is about to be "published" by (another) television executive -- with plans to combine the paper's news operations with those of two local TV stations, especially the local Fox affiliate.

Here's the story in two pieces:
The new guy, Richard Graziano, has been general manager of the two Hartford-area stations for the past four years, previously being credited with raising ad sales at a Boston TV station. 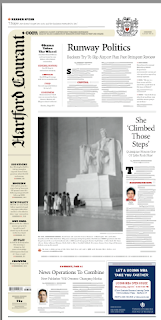 He replaces the last TV exec that Tribune sent to Hartford, who has been there overseeing early retirements, buyouts and layoffs for two and a half years, along with general shrinkage of the paper itself. I think the Courant's news staff was once more than 300; last summer it was chopped to about 175, and now is around 135. The front page took on a new look last year, too -- over there on the left, with its nameplate turned sideways.

No word yet -- as far as I've seen -- on the news-management organization of the converged organization, or what role the Web will play. Compare http://courant.com and http://www.fox61.com

Chicago's Tribune Co. has owned The Hartford Courant ("Older Than the Nation," founded 1764) since acquiring the Los Angeles's Times-Mirror Company, which acquired the Courant about 30 years ago. (That's when I turned down a raise, took my small employee stock investment, and went back to grad school full-time.)

Tribune says its going to combine the operations of the two TV stations with the Courant in a high-definition TV studio they'll start building in the newsroom sometime this summer. I don't know what to think of the fact that the station's Web site still has 2008 job openings posted.

Exactly how the news-reporting convergence will be organized hasn't been announced... Perhaps some version of the Tampa model.

The New London Day notes that "Up until 2007, Tribune's ownership of The Courant and the two television stations violated the Federal Communications Commission's ban on cross-ownership of newspapers and broadcast outlets in the same market. The FCC relaxed the rule in December of that year."

I haven't seen anything that explains the relationship of a Tribune-owned Fox network affiliate with Fox's corporate owner, NewsCorp, or what part that might play in editorial policies. (None, I hope.) Things were a lot simpler back in 1764, or 1979.