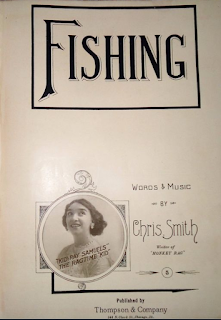 My friend Richard loves to sing this song, and I noticed a while ago that I could pick it out on my Firefly banjo uke in his key... so at least a couple of times a month we inflict it on folks at one or another of the local jam sessions.
Last night someone asked where the song came from, but my voice doesn't carry well enough to give the 1911, 1929 and 1952 answers in a noisy restaurant...
So my department of compulsive research spent the morning  aggregating some bookmarks about the song to post here and reference on Facebook.
(Most of the links below are to YouTube copies of the recordings by the folks named.) 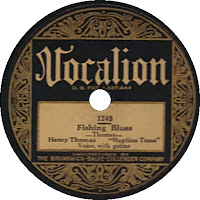 The "root" source for most of us seems to be Henry Thomas's 1929 78rpm Vocalion record -- reissued decades later as part of the still available Harry Smith "Anthology of American Folk Music" collection on LPs (and later CDs) by Folkways records starting in 1952.

(More about Henry Thomas and his discography.)
From the Smith album, which I remember taking out of the library when I was in high school, Thomas's version of "Fishing Blues" was learned by the sixties' generation of jug bands and folk singers, including Mike Seeger, the Jim Kweskin band (who inspired me to figure it out on the guitar), the Lovin Spoonful, Taj Mahal (who added more verses and seems to have spread it the farthest), Doc Watson (who also had new lyrics), and many more.
Mike Seeger and Dom Flemons, 21st century American songster, are the only folks I have met who learned to play it like Thomas did, with a rack of pan pipes called "quills."
Elijah Wald, music historian and performer, explains the 1911 Chris Smith song that preceded Thomas's version, and had a somewhat different message, a "feminist ragtime cheating song." Sam Chatmon went back to that 1911 original in the 1970s.
I've also read many discussions of the song over the years at mudcat.org, the Web's venerable "Digital Tradition" folk music forum and lyric archive:
https://mudcat.org/thread.cfm?threadid=18206

Posted by Bob at 12:53 PM No comments: Links to this post