Click the image (or slow-loading Flash box) above for Music and fun on the Streets and in the Friday Night Jamboree/ from Doug Thompson via Vimeo. (It's Doug's blueridgemuse.com production from Sept.7, 2013, including a mild-mannered mandolin player -- recognizable in a yellow cap I acquired at a New England Fiddle Contest many years ago. The soundtrack, however, is the band playing across the street.)

I've been playing in old-time and bluegrass sessions several nights a week for the past six months, including the RadfordFiddle.com jam on Mondays, a smaller (less old-time) Radford Pizza House session on Tuesdays, the Blacksburg old-time gathering at the Farmers Market on Wednesdays, the street sessions that spread out from the always-packed Friday Jamboree at the Floyd Country Store, and the Sunday afternoon jam, also at the Floyd Country Store.

Most of these venues have some status on Virginia's Crooked Road, a tourism-oriented attempt to map locations for old-time music in the state that really seems to work: I've met musicians from Holland, Germany, the U.K., Ireland and Australia at one or more of these events, and most mentioned that "Crooked Road" venues were on their touring agenda, along with summer music festivals in West Virginia, Tennessee and North Carolina. 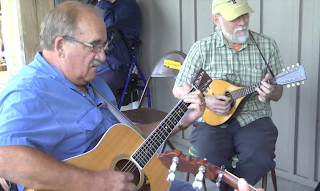 This page will make a good parking space for links to longer articles about the Crooked Road:

New York Times 2011
Smithsonian
Roanoke Times (multimedia, uses Flash)
Roanoke Times stories by Ralph Berrier
Virginia is for lovers tourism site
Roanoke Times on a campaign to name the Crooked Road a National Heritage Area, and a group fighting the idea. (August, 2012), with a follow-up about abandoning the idea in 2013 when some communities expressed fear of "federal strings" connected to federal grant funds.