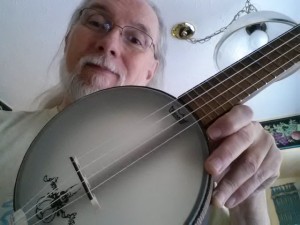 My "Firefly" banjo-uke raises a few eyebrows around old-time Appalachian music sessions, so I thought I'd put some links here... And maybe a YouTube video of myself when I get around to it. (This is also my first attempt at posting to this old blogger blog from an iPad, so some editing and correction of  links and players for other folks' YouTube videos may be necessary.)

It has four nylon strings (like a uke) and a drum-head (like a banjo). It also tunes uke style, g-C-E-a, with the two outside strings being the highest pitches. The high "g" is the string closest to the thumb, which is also true of the five-string banjo. That coincidence has inspired me to experiment with playing in a "claw hammer" oldtime banjo style, as well as more traditional uke strumming and picking styles.

In addition to playing it in Radford, Blacksburg and Floyd, I've inflicted it on that old gang of mine in Connecticut in December, strumming along on sea chanteys and drinking songs in the pub:
Http://thejovialcrew.com/?page_id=1475

The Firefly is a modern design from a Massachusetts company called http://MagicFluke.com -- I bought mine from http://MimsUkes.com in Floyd, Va., so that I could try it first. I like it because it is incredibly light and, with an extra-long neck, can be adapted to play in more keys, using a capo for some tunes in the keys of A and D.
Here's "Redhaired Boy," usually played in A on fiddle, but sometimes sung as the Irish ditty "Little Beggarman" in other keys. I have experimented with it in both key of C and key of D fingerings on the banjo ukulele.

The first time I saw the banjo uke merging with oldtime tunes was 30-some years ago, in the hands of Jeff Claus of the Horseflies, providing a driving rhythm for the band's neo-primitive bug music. More recent example: http://www.youtube.com/watch?v=FaVFzdroXKg


There's no Firefly-Horseflies connection, as far as I know, but stranger things have happened. TheFirefly's  lightness I mentioned is the result of MagicFluke's buying the "drum" shell and its synthetic head already molded or cemented together. There are no metal mounting brackets (originally needed to adjust the tension of  humidity-sensitive natural skin banjoheads) and no wood and metal resonator like some 1920s models. As a result I can head for a jam session carrying a guitar, a mandolin, and the Firefly without needing a cart or pack animal, or feeling like one. And it is so much fun that I often wind up leaving the guitar at home.

Curiously, the razzmatazz strumming style banjo-uke (a.k.a. banjolele) has quite a following in the U.K. (No U.K./uke pun intended) because of a 1930s-40s comedian, singer, actor and pop star named George Formby, who never quite caught on in the States. The George Formby Society (http://www.georgeformby.co.uk) keeps his legend alive and active over there (http://www.georgeformby.co.uk/news/morecambe/130214.html).

Posted by Bob at 2:51 PM No comments: Links to this post