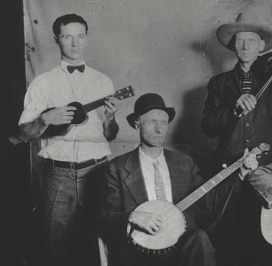 Just discovered both "The Syncopated Times" and -- in passing -- Iver Edwards, ukulele and harmonica player from Galax, Va., in the 1920s, pictured holding what looks like a soprano Martin ukulele in a band photo accompanying this article about vintage recordings:

Now I'm going through Ernest Stoneman records on YouTube listening for telltale ukulele plinking in the background. Easy to loose it in the similar-octave strumming of the autoharp and mandolin, such as that heard on Stoneman's famous Titanic recording...


Hop Light Ladies may have been one where Iver put down the uke and played the harmonica...
https://youtu.be/boE8U3wAUC4


New River Train might have a ukulele in there, mostly smothered by the banjo...
https://youtu.be/nQzRrLuWOE0

Tunes to Learn (or at least play along with)

Mac's Tune of the Week

Someone posted a question on Facebook asking people more or less my age whether they thought John Denver's hit "Take Me Home Country Roads" was "a country song," the topic apparently being part of the aftermath of the Ken Burns PBS series on country music.

I wrote this off the top of my head in reply, but I may come back here and change it if I decide I said anything I disagree with.

I believe from its 1920s beginning "country" has been a commercial music merchandising term to which people add whatever cultural baggage they want... and the industry was gradually Consolidated in Nashville ...

He crept in through the separate short-lived  commercial "folk music" scene exemplified by the Kingston Trio and the early 1960s ABC Hootenanny TV show -- starring, among others, the Chad Mitchell Trio, which dropped Chad's first name when John replaced him. As the British Invasion rockscene took over teen culture, increasingly singer-songwritery "folk" college coffee houses and concerts and festivals kept going... (Bruce "Utah" Phillips had a great rap about my preferred part of the scene, performers like him who, unlike John Denver, did not want to be pop stars on any Billboard Chart and were more interested in "making a living, not a killing.")

That folk music scene and folk pop scene in the 1960s and 1970s had a different network of performance venues (college concerts included), radio programs (college FM), network television programs, PBS specials, and as the folk pop thing branched off what became a singer songwriter soft rock thing, some of the audience  overlapped and  migrated toward "country."

Meanwhile as "country" went through overproduced pop phases, the cleaner acoustic guitar and vocal sound and homespun lyrics of Denver, his collaborators, and a few other folk scene refugees became more acceptable to Nashville industry fans...

It's music. it's marketing. And it's listeners who don't give a crap and tune in what they like, when they can find it. Maybe they sing along. Maybe they play the songs at their local coffee house or open mic. Maybe they don't debate what label to put on something.

I didn't play the fiddle then... And I barely do now... And I didn't compete in any contest, but in the 1970s the New England Fiddle Contest in Hartford was one of the major landmarks in each year... And in one or two of them I got to write articles or take pictures that wound up in the Hartford Courant... Including this 1979 story, which the late Paul Lemay, organizer of the contest, included in the press kit he sent out each year, along with the picture or two that I had taken... I was reminded today that the internet archive had saved parts of his FiddleFest website, launched when he revived the contest around 1998 or 1999.

Alas, someone let the domain registration go after Paul died, so the original site is no longer about fiddling.

This YouTube clip of a 1924 recording of Ida Red by Fiddlin' Powers and Family is accompanied by a photograph showing a young lady in the band holding a ukulele, so off I went searching for written sources about the group and the ukulele player in particular.
Success! This article by Rene Rodgers at the Birthplace of Country Music Museum in Bristol answered my question as fast as I could type it into Google. The youngest sister's name was Ada, and there is another picture of her with her ukulele at the Museum website! Alas, the article mentions that she moved on to the Autoharp, and doesn't say much about her ukulele playing, so maybe she only played ukulele during her early days as a musician. That was true for me too, as I moved on to guitar and banjo and mandolin and didn't get back to the ukulele for about 30 years!
It looks like the young women of the Powers family were progressive in other ways too... those bobbed hairdos look pretty modern. But that's a topic for a different kind of blog.
See my previous posts, "In search of the mountain ukulele," and "Dr. Bates ukulele playing daughter."
Posted by Bob at 12:11 PM No comments:

"What tunes do you play at those 'old time music' jam sessions?"

I can generally rattle off a dozen tune names, not that I really play all of the tunes that well... but there are dozens.

Woody McKenzie, fiddler-host of this week's Wednesday night old-time string band jam session at the Blacksburg Farmers Market had a request for a more complete tune list.... someone running an old-time jam up in New England wanted to be able to link their Facebook page to an authentic tune list from down here and Southwest Virginia.

So I made this blog page to hold whatever lists I can come up with, then he or anyone else can point newcomers, students, or prospective Jam leaders to this page... without necessarily belonging to any of the proliferating Facebook old time music discussion groups.

There is an annual list compiled by one of the local musicians, tracking the popularity of tunes played at the Blacksburg Farmers Market through the year, under a variety of host fiddlers and bands. I hope the gentleman who compiles it can provide it in a format suitable for posting here. An older version from a few years ago was posted to the Crooked Road website, and I'm going to link to that one, if it is still available.


Meanwhile, one of the several bands that lead the Wednesday jam, Happy Hollow String Band, has a website with an impressive playlist of its own, sometimes with  chord charts or music for the tunes:
http://happyhollowstringband.com

These are all primarily fiddle-centric old-time stringband dance music jams, where everyone plays together, rather than bluegrass jams where participants take turns showing their stuff on lead breaks.

The Independence web page describes its round-robin jam format, where participants take turns either leading or requesting a tune, or sometimes the song.  In Floyd and Blacksburg, old-time jams are a little different, in that the lead fiddler or host band choose all or most of the tunes, maybe with a little group discussion or a newcomer's occasional suggestion.

No matter who leads, I tend to have fun anywhere that I can find a few of the tunes on my mandolin, or strum some rhythm chords on it or a banjo ukulele -- when that seems acceptable to the leaders of the group... especially if I'm pretty sure I'm going to be drowned out by other banjos and fiddles.

A Leon Redbone story and picture 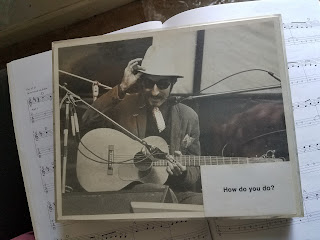 A musician friend -- singer, guitarist, radio host, and scholar of pre-WorldWar II music -- posted on Facebook that he would like very much to meet Leon Redbone... so I told him my story.

In the 1970s, another friend of mine, Jim Rigby, freelanced music articles for a hip alt-weekly, the Hartford Advocate, and called me up to say he'd gotten an interview with Leon Redbone. I had been at the daily Hartford Courant for years and also knew a little about blues/ragtime guitar, so Jim asked me to come along and help with the interview... backstage at the legendary The Shaboo Inn near Willimantic, Conn.

Two memorable things about the meeting:

1. A musical revelation (to me, anyway): Among his influences, Leon mentioned singer and guitarist Lee Morse, which was the first time I'd heard of her. (Thanks to YouTube, she's much easier to find today.)

2. Style:
From his "Ah yes, the gentlemen of the press..." Leon remained in character, which sounded like he was channeling W.C. Fields and Groucho Marx simultaneously, with a touch of Chaplin. As he said those "..  gentlemen of the press" words, he began rummaging through his pockets -- pants,  suitcoat, vest, shirt -- muttering about how he had too many pockets, "... counted them once..." -- finally producing a business card and giving it to Jim, who glanced at it and put it in his pocket. And off we went with the interview.

At the end, I said (approximately), "Leon, when you were up in Lenox, Mass., last year, I took some pictures of you on stage and I really like the way one of them came out. I'd like to send it to you. Could I have one of your cards?"

He went through the whole pocket-searching shtick again, finally producing the card, which I pocketed, and said goodnight.

Here's the picture I was telling him about, and the card. I never sent him a copy of the photo, for lack of an address...

The front of the card says "How do you do."

The other side is blank.